Starting version 0.7, you can "reserve" ports that you are using - once reserved, other controllers that connect to the same drone agent will see your name against the port. If a port is reserved by someone else, you can "force-reserve" it. 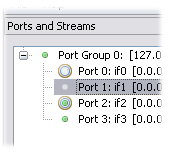